Aaaaaah! I’ll buy it at a high price!

Well done if you got that reference – we can be friends.

Anyway, as regular readers will know I am on a quest for the “Holy Grail” Which in this case turns out to be a rare and expensive Saturn game from 1997. For those who need a refresher I’d suggest reading the original post.  Go on, have a read.  I’ll wait here for you!

All caught up? Good. The tale continues:

Within a few hours of posting the spares, doubles and gaming bric-a-brac all over facebook, I started to get replies. People were interested in my wares, which was great! But as I slowly realised, they were only interested in small pieces of it. I didn’t really want to pack this stuff into 5 or 6 boxes, pay multiple postage charges and ship this stuff to opposite ends of the country.

Begrudgingly, I started to put prices on the individual consoles. This had to be done on all 3 sales groups and was a little bit of a pain. I had to deal with some strange characters as well! 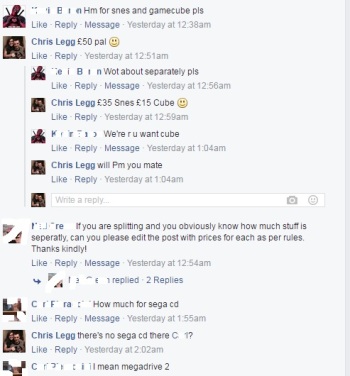 After a few back-and forths with people asking for things without reading descriptions (What do you mean it has no cables?!) I was getting a little bit down. My salvation came from a local lady called Emma, who jumped at the Amiga and came round to collect it the following weekend. She was setting up a retro gaming area herself, and like me, she was a massive Amiga fan growing up.

A nice score there, and with minimum fuss! A couple of days later, I struck gold again! Stuart from Scotland was interested in the Megadrive bundle, and since he was polite I didn’t mind posting it off. £35 extra there.

Clearing the rest would take a long time, however. I dropped the prices on all pages trying to shift these relics. People would browse, and try to haggle. I know my stuff, and I know what it’s worth so I stood firm.

In the end, Ebay was the way to go. I don’t like their fees but a bigger audience could see this stuff and I could hopefully clear the lot in one go.

The Auction was up for 5 days and ended at £35. I was a little disappointed, but money was money, and only one of the four remaining consoles was complete with the correct cables. It was a local collection also, and I believe that will take place this weekend. No messing around at the post office made this a little bit sweeter!

Not bad for doubles and spares!

With the bartering and bargaining done, and money either in-pocket or on the way there, I focused on my goal: The reclamation of a rare gem.

I asked around in some of the usual places and hunted round a few websites – hoping I’d get lucky. No dice on this occasion. And no burning Rangers either! Damn. Much like the last chapter of the story, I hauled my sorry self back to the ‘bay.

There were a couple of options. One guy admitted the game was scratched up but still demanded £120 for it. Someone else was offering BR in a bundle of 15 games for £450 (a brand new PS4 costs £270, for comparison!)

We got lucky though. A new listing had come up and put the game up for £80 buy it now with £3 postage. It was in “Great Condition” so I snapped it up.

It arrived yesterday. I was a little dismayed at the packaging for something so valuable.

Wrapping up my favourite game in a wispa box is bad enough, but the parcel wasn’t even sealed at the bottom! The black section you can see in the third pic is the actual game box. And this is how it arrived. Parcel says “signature required” but it was just dumped through the letter box!

However, after the nervous unwrapping I felt a little better. The box was fine, the manual was good and the CD? Well it has a few, small scratches. Could have been better I suppose. But I can get this disk re-surfaced and it’ll look good as new! It’s not like I could send the game back after this whole ordeal!  For the first time in ooh, 16 YEARS….

I HAVE IT! GO GO BURNING RAAAAANGERS!

For you Jesus fans: It once was lost, but now is found!
For you Star Wars fans: “We meet again at last, the circle is now Complete!”

I originally thought this journey would be a great two-part post. But now I’ve got the game in my possession, expect the conclusion to the Holy Grail Trilogy – A full review and gameplay Video!

Well……maybe after some serious playtesting haha!

Thanks for reading, keep spreading the Load/Error love!

One thought on “The Quest for the Holy Grail (part 2)”